Beastly Kingdom, The Dragon and Other Survivors 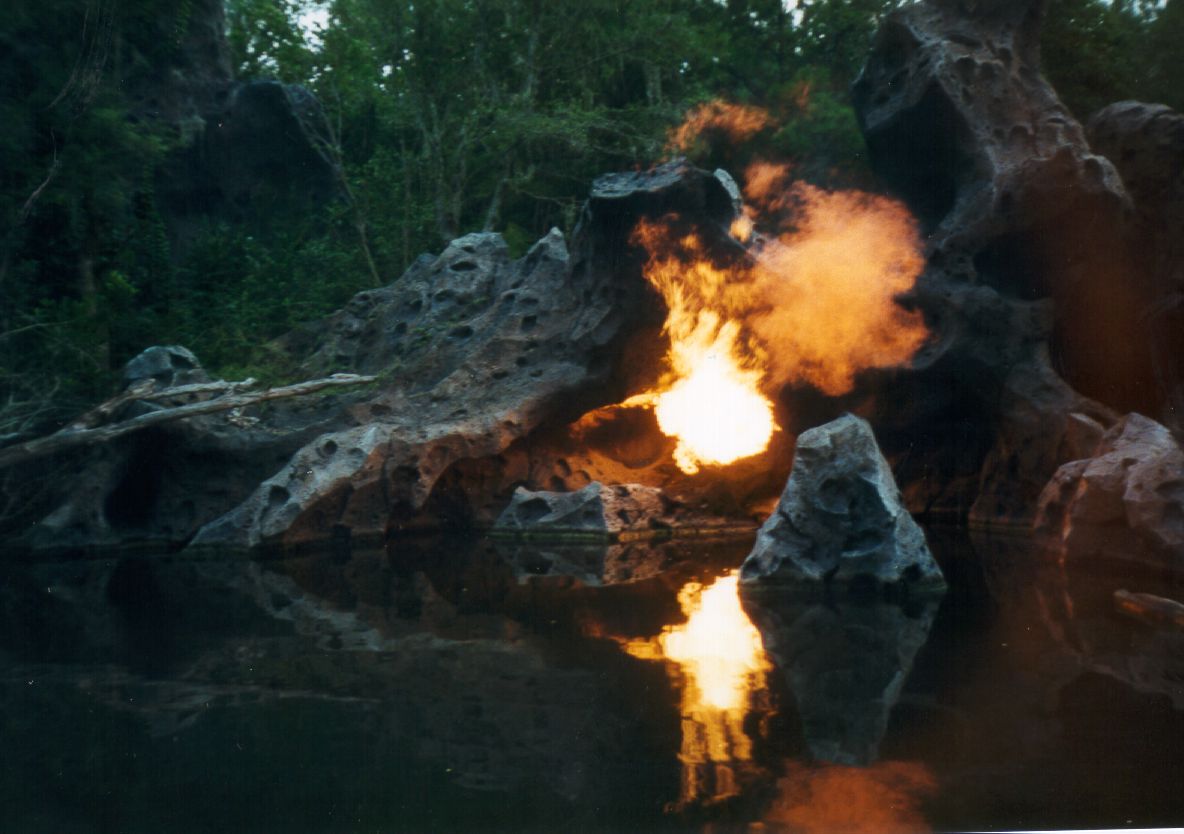 During the opening year of Disney’s Animal Kingdom, with Beastly Kingdom put on hold, very little reference to creatures of fantasy existed.  While Beastly Kingdom has been covered by many others, this post explores what actually made it into the park, including the mystery of the Dragon.

A Promise of Mythical Creatures

Even though the tragedy of budget cuts pushed Beastly Kingdom out of Phase 1 – the park media, logos and merchandise still to contained a Dragon as a prominent figure.  Materials would vaguely reference how the original concept for the park included an animal fantasy area with a topiary castle as a central icon.

“While not included in today’s park, it could well be part of tomorrow’s.” – The Making of Disney’s Animal Kingdom Park, 1998

The parking lot made reference since 1998, specifically for those parked in Rows 21 – 29 Unicorn Section.   Apparently, if it’s not broke, don’t fix it.  In 2005, years after park opening, as part of the Cast Lanyard Series (also known as the Hidden Mickey Pin Collections), a set of pins representing the sections of the parking lots was introduced.  While the Yeti lot was later added to handle additional crowds, the Unicorn continues to hint at what could have been.

At the entrance to the park, three giant heads have always loomed over guests.  An elephant, triceratops and dragon have been in place since park opening. The dragon head remains today, unchanged, staring down at each guest that walks underneath. Given the change of events, perhaps it should be swapped out for a Banshee head or the Yeti of the Forbidden Mountain.

“Welcome to a kingdom of animals… real, ancient and imagined: a kingdom ruled by lions, dinosaurs and dragons; a kingdom of balance, harmony and survival; a kingdom we enter to share in the wonder, gaze at the beauty, thrill at the drama, and learn. Dedicated this 22nd day of April, 1998″ – Michael D. Eisner

During the final stretch of construction of the park, the fantasy elements had been reduced to only a few items in the vicinity of Camp Minnie-Mickey.  These show elements were best seen aboard the Discovery Riverboats.

Hop on board the riverboats at the Safari Dock and you may encounter:

“The boats offer an excellent view of the park’s central icon…. as well as providing passengers a few surprises along the way including … the lair of a fire-breathing dragon.” – Collectors cards #4 and #24

After leaving the safari dock, passing under the Oasis bridge and rounding off to the left, guests would encounter the lagoon.

The first “fantasy” element encountered from the Discovery Riverboats was to be the Unicorn, hanging out at Unicorn Lagoon.  Yes, this was simply just a statue – possibly 8-10 feet high.  Unfortunately, I do not have a picture of the beast along the river, as it had been removed by March 1998.  The map reference to the left is taken from the cast preview map March 4 – 8, 1998.

When the unicorn was first placed in the lagoon, it was bright white and brand new.  Later, it was quickly “aged” to make it appear ancient and mysterious.  Finally, for reasons unknown, the unicorn was removed altogether.

For a picture of the statue after it was taken down, see this post on micechat.com – https://discuss.micechat.com/forum/disney-theme-park-news-and-discussion/walt-disney-world-resort/199761-disney-s-animal-kingdom-unicorn

After the removal of the statue, a note was sent out regarding the revision to the script.

“Due to the sudden disappearance of the unicorn, we now have an empty lagoon.  We have decided to put off talking about legendary animals until after the Camp Minnie Mickey bridge.”  – March 1998

“Disney’s Animal Kingdom pays tribute to all the animals that ever were, and those that never were…” – now to be discussed further down river.

There were various rumors for a while about what may be added to spice up the lagoon, such as placing deer along the left bank, however, that never happened.

In order to fill the void, skippers often improvised a bit.  At one time, there was a nest of native hatchlings, and later an owl that hung out in this area.  A joke would occasionally be made in reference to the hibiscus up high and the low-biscus down low.

Keep a weathered eye out for the Kraken, for fear it will destroy our boat!  At least, that was once the plan at one point in time.  A very early script referenced the Kraken as a monstrous sea beast that could easily destroy an entire ship.  The skipper would warn the guests of the dangers in the water.  Eventually, a sensor would set off the “KRAKEN ATTACK!”

The attack was accomplished by transducers attached to the bottom of each bench.  If you tilted any bench forward, as mentioned by the skipper after your boarded, you would see a storage area containing left vests in addition to a transducer fixed to the underside of the bench.  Only one boat was known to actually have a working set of transducers, the Scarlet Flamingo.  These transducers would provide lots of vibration when activated.  The idea was to simulate an attack from under the boat, deep in the water.  The reality actually felt more like the boat had run aground.

Unfortunately, the attack was never fully put into service or used in the final attraction.

Just past the Camp Minnie-Mickey bridge, on the bank of Camp Minnie-Mickey, a pile of stones that somewhat resemble a dragon appear. As of 2018, the pile from 1998 is still intact. Water pours out of the mouth and into the Discovery River. This water is actually from the stream that ran through Camp Minnie-Mickey.  The Riverboat script never directly referenced this structure, and it is a bit surprising that it survived the Pandora – The World of Avatar remodel.  Perhaps it is odd enough looking that it could fit into the world of Avatar.

A stretch of the river, located just north of the Camp Minnie-Mickey bridge, became home to what is known as Dragon Rocks. Initially envisioned as a full size cave with a fire breathing animatronic dragon attaching the riverboat, it was reduced to much less. The initial experience included a large area of volcanic rocks on the left bank of the river (note: the boats always ran clockwise).  The remains of a half a dozen braves knight’s armor was scattered about the rocks.  Melted, skewered, torn in half, bitten off — these knights must have lost an epic battle to the dragon.  As the boat approached, smoke billowed from the cave, thunderous roars were heard, and massive flames shot out from inside the cave.

“This stretch of the river pays tribute to creatures of myth and imagination. Up ahead is Dragon Rocks, home to the last of the great fire-breathers. Of course we all know that dragons don’t really exist. Or do they? BIG BURST OF FLAME” – Discovery Riverboat script, February 1998

For unknown reasons, the knight’s armor vanished by March. Strangely enough, this did not warrant an update to the map. If scrutinized closely, 2 of the knights can been seen in the tiny image of the rocks on the map.  The earliest copy of a map that I have is from March (4-8) 1998.  The rocks are featured on the river just off the banks outside of Camp Minnie-Minnie with a flame shooting out into the river.

Flames would typically shoot out multiple times as the boat crept by.  Strategically placed barriers in the water would keep the boat from accidentally running into the rocks should a skipper not steer properly. In order to time the dragon effects for each boat, sensors along the bank would be triggered to enable the show effects.

During Cast Previews, the Discovery Riverboats underwent a dramatic change based on testing feedback. In order to make the experience more exciting, a second cast member known as an “animal presenter” was placed on board in addition to the skipper. The present would discuss animals, the environments and walk small animals in containers around the boat. This included an emperor scorpion, tarantula, and leopard gecko. With this change, the dragon rocks effect no longer fit into the experience.  One version of the script attempted to intermix the spider and dragon rocks.  In this version, during discussions regarding spiders, the fire would go off, followed by a statement of “what type of spider do you think that is?”

While the dragon had been shutdown in April, it wasn’t until June that the map finally caught up. The rocks continued to appear (along with hints of the armor), but the flame was removed.

With the return of the Discovery Riverboats, retooled as the Radio Disney River Cruise, the dragon effects were reactivated. The spider connection was revisited and there was some connection made to the fire shooting out of the cave related to a spider. If you look closely at the picture, you will see a spider web now attacked to the rocks.  When the map was retooled in 1999, the reference of the rocks was removed completely.

Fast forward nearly 20 years to 2017. Pandora – The World of Avatar took over Camp Minnie-Mickey and finally put the rest the fate of Beastly Kingdom. The Dragon Rocks still remain, but have been overtaken by foliage and an access bridge/boardwalk. Guests can now walk directly behind, and even lean on the rocks that were once greatly feared. The balls of fire have been extinguished, never to return.

A series of Animal Kingdom Happy Meal toys was released to coincide with the opening of the park in 1998.  Not only did the box show a picture of a dragon hiding in a cave along the river, one of the toys was an actual purple dragon. The dragon was various shared of purpose with pose-able legs and wings. It was 4″ long head to tail tip, 3″ tall and about 1.75″ wide. The bag, emblazoned with the Animal Kingdom logo, simply stated “Dragon Figurine”.

“Journey by boat down Discovery River! Watch out for the fire-breathing dragon in the cave!” – as teased by the Happy Meal box

Various posters, souvenir cups, merchandise and the park map made reference to a fire breathing dragon residing along the river attacking a boat.

Remember When…. or maybe not.  The following pin came out in 2007 as part of a “Remember When” series covering attractions that were no longer.  It was limited to an edition size 750.  The ironic part about the pin, is that the dragon appears – when there never was a visible dragon on the river.

For additional pictures, including shots of the Happy Meal box itself, see LaughingPlace.com, JimHillMedia.com, and Dan Alexander Dizmentia Blog’s post.

One thought on “Beastly Kingdom, The Dragon and Other Survivors”