There have been hundreds of Animal Kingdom related trading pins that have come out over the years.  An early Cast Member exclusive series, the Atlas set, was released in 2001.  This set was exclusive to Cast Members and limited to an edition size of 3,000.  Each park map was broken up in a number of pins, which together formed the entire map.  Each pin featured a pin on pin highlighting a major attraction of building of that area.

As the map was based on the park at the time of 2001, there are a number of areas that have changed:

In this picture you can do a direct comparison of the actual 2001 map to the pin set.  Aside from the exaggerated pin on pin elements, the pin set is a fairly accurate representation of the map itself. 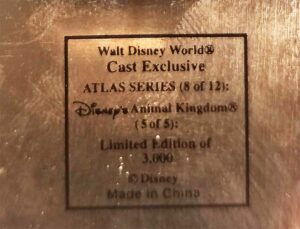